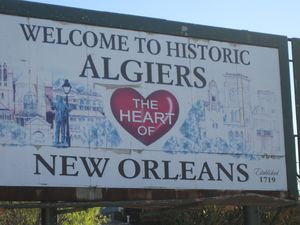 Algiers Powder:
Algiers Powder (as it is usually called) is generally used as a love drawing powder. Based on it’s construction I would say it’s pretty strong for drawing any kind of love you’d be interested.

Looking at the ingredient list for the oil we can see it’s actually a Red Fast Luck oil that has been “tempered” with the longer lasting effects of patchouli. The earthy patchouli is also said to increase the occult power of the other ingredients as well as adding it’s own sexual passion and money drawing powers.

Three other curio’s for love, luck and money are added to the bottle:

Based on this formulation I see this formula as a sort of Fast Luck and Special Oil #20 combination oil. Complete with the curio additions!

This part is pretty straight forward actually. Just follow the process for making a fast luck oil and leave out the alkanet and add some Patchouli

Algiers Fast Luck Powder Recipe:
To make a fast luck powder you could simply add the essential oils to some arrow root to give it a good smell, then grind up the herb form of the essentials (probably leave out the vanilla bean as it’s cost prohibitive) and mix it all together. In this case you would still add the three curio’s, but in powdered form. That would be difficult for the High John, so make sure if you’re going this route you source some powdered High John. (High John the Conqueror is a pain in the ass to powder without industrial tools!)