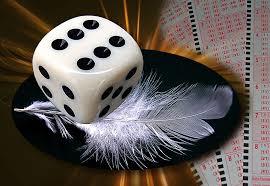 Probably the most ubiquitous formula coming out of New Orleans is Van Van. Right behind it though is a bottle of Red Fast Luck Oil. When you need good luck in a hurry this is the go to oil for most practitioners. Especially in the realms of love and money, this oil is excellent.

At this point the actual recipe for this formulation is also pretty unchanging and well known, so I’ll be giving the core recipe with a few variations I’ve seen around the web. Most practitioners tart their recipe up with various additions in the bottle which while showing some general consistencies between practitioners are unique to each maker.

The recipe for Fast Luck Oil has been well known since Zora Neal Hurston published it in the 1930’s.

It is given as follows:

In this formula, cinnamon is a good choice for money luck, but it’s also considered a “hot” spice and so works rather quickly, adding speed to the formula.

Vanilla is excellent for love luck. With vanilla you are drawing a softer more personal love as opposed to a quick knee trembler.

Wintergreen seems to serve two purposes here. First, used in magic it draws money luck, especially through gambling and it also sexes up the mixture since it’s good for sex luck. As an aroma, it is a top note which helps in binding the two opposing fragrances of cinnamon and vanilla.

I’ve seen a number of variations on this recipe throughout the web.

First Herman Slater / Malcolm Mills list a rather “unique” recipe for it:

Now, I don’t know who is ripping off who with that recipe, but someone’s getting ripped off… mostly their customers.

Talia Felix lists another variation that she found in a museum in New Orleans:

This would smell pretty good and would function well as a good luck oil. It would have some cleansing properties as well, probably acting as a sort of ‘blockbuster’ through action of the lemongrass.

Beyond these two recipes (which are the most commonly seen variation – in particular the Slater/Mills version) there are a ton of random “fast luck” recipes I’ve seen about which tbh don’t bear mentioning.

Making Your Own Fast Luck Oil

There’s a couple of ways to go about this, and a couple of problems that need to be addressed here.

The easiest way to make this oil would be as an infusion. Simply pack a bottle with cinnamon chips, wintergreen leaves and a vanilla bean then top is with oil and let it sit in the sun for a month or so.

The Vanilla In Your Fast Luck Oil

The core problem with this oil is the lack of an essiental oil of vanilla. Vanilla products come in three varieties; extract, absolute and CO2 extract. Of course each one is more expensive than the last.

Vanilla extract is the normal stuff you see at the grocery store and probably cook with. It’s got a fairly high alcohol content usually and doesn’t mix well at all with a base oil. I was playing with my Special Oil #20 recently and tried making it with vanilla extract. Please learn from my mistake! It doesn’t mix well and the smell is wanting. The oil has a Frankenstein fragrance where you clearly smell Patchouli and there’s clearly some vanilla, but they certainly do not create a bouquet.

Absolute Vanilla IS useable in this blend and if you’re going make this oil from essentials absolute is probably what you’d want to use. This is vanilla extract that has had the solvent that was used to extract the vanillin removed from it (usually pentane or hexane is the solvent). The resulting honey like compound is dissolved in alcohol which is filtered and evaporated. As a consequence it is quite a bit thicker than other essential oils, so you’ll want to use less.

CO2 extract is just what it sounds like. The aromatic compounds are extracted from the vanilla bean through CO2 being passed through it. It’s quite expensive and the highest quality you’re gonna find. Usually to the tune of about $100 per ounce of oil! This is beyond most people and I’m one of those people so I’ve no experience using it.

I’ve also been seriously considering making an oil infusion of vanilla to use in these oils. I’ve seen people use a couple good pods chopped up in about ten ounces of carrier oil (almond or jojoba usually). I’d probably do two to four pods in 4 ounces of oil since it would need to be really strong to come through with the other ingredients.

So long story short it’s probably most economical to get some vanilla absolute and make it from that.

Once you’ve found an ingredient ratio you like (with the vanilla absolute you’ll want less than all equal parts) it’s common to dye the oil red. You can use food coloring, but the traditional red dye for magical oils is a couple of alkanet flakes in the bottle per half ounce of oil. This is especially good for this because alkanet is traditionally used as a money drawing herb.

According to the Lucky Mojo site Double Fast Luck Oil is made by taking Red Fast Luck Oil and combining it with a green alcohol based perfume. This would create a density differential between the two oils and you’ll end up with two separate red and green oils. Shaking the bottle will make a purple emulsion.

This compound is said to be good for love and money, pretty much just like regular fast luck and such being the case I’ve never made it. You could make a tincture with Bacardi 151 or Everclear and some wintergreen or mint leaves which would come out green and that would work just fine. But again I’ve never made it.

Once you get past the vanilla problem, Red Fast Luck Oil is one of the easier Oil recipes to make. It’s also one that you can get a whole lot of use out of!

It also forms the basis of another New Orleans style oil when combined with special oil #20 which we’ll be talking about soon!